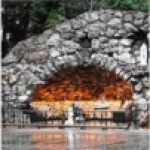 In today’s Gospel, Jesus says to his disciples, “Whoever loves me will keep my word, and my Father will love him, and we will come to him and make our dwelling with him.” (John 14:23-29).

At each and every stage in our lives God comes to us and tries to get in touch with us. Sometimes when God comes to us, we are too pre-occupied with school, job, family or illness. But God keeps coming back to us again and again, as we go through the ongoing stages of our lives.

Nobody is busier than a caring and a loving mother. Being so busy, it is easy for a mother to not savor the full impact of God’s presence at the various stages of her life.

A woman by the name of Mary Murphy shares a wonderful story of how God was finally able to touch her life.

Mary Murphy says that she grew up in the Midwest. Her father always listened to the Notre Dame football games on the radio. But growing up her family was too poor to ever travel to Notre Dame, Indiana.

Now that Mary is an adult, she goes to Notre Dame regularly. In fact, she is now old enough to stay at the elder hostel on campus.

One afternoon she rode her bike down to the Grotto. She sat there on the bench looking around and feeling melancholy. She saw a lot of young people and realized that here she was, now staying at an elder hostel.

Mary sat there looking at the votive candles that were burning and she thought: “I wonder what stories are behind those candles? What did people have on their minds when they lit them? What was coming from their hearts?” A God Whisper

She missed being there with her own young children when she was young. She yearned to be a young mother once again.

Then she saw a young mother come down the path, pushing a baby in a buggy. She had three other children with her as well. The young mother sat down with the baby. Her other children went right up to the candle stand behind the railing and lit every single candle! Mary Murphy just sat there.

She wanted to be young again and be able to do that with her children. She remembered way back when she had her five children and no money. They didn’t go anywhere.

But one year her husband got tickets to the Blue & Gold game. They packed everyone in the station wagon with lunches and Kool-Aid. They all went to the Notre Dame game.

After the game Mary and all her kids went to the Grotto. Oh how she wished she had that moment back again. Her kids had said, “Mommy, can we light a candle?” And Mary said, “Absolutely not! If one of you lights a candle, then all of you will have to light a candle. Do you kids think that money grows on trees? Aren’t you ever satisfied?”

Mary had said all that to her kids and she hadn’t thought of it until that moment. Mary started to get emotionally upset, finding that old memory hard to handle. She got up and left the Grotto. She had to walk the bike back to the elder hostel. She could hardly see because of the tears in her eyes.

A couple of days later, Mary went back to the Grotto. She sat down and was beginning to pray when she noticed another young mother with two young boys.

This young mother was very agitated. It was a very hot afternoon and she was all sweaty. Her hair was pulled back and her two little boys had black T-shirts on and they kept wiping the sweat from their faces.

Mary felt that this was the woman’s first time at the Grotto. The young mother looked around at the reverence of the people there who were praying. She looked at all the candles that were lit. The young mother would do the right thing. So she told her two boys, “Shh, Shh. Kneel down. Kneel up straight!”

The young mother was trying to take a picture, so Mary went up to her and said, “If you’d like, I’ll take the picture of you all together.” The young mom said that would be nice.

Mary said, “I have an idea. Why don’t you all stand at the altar? There is a big insignia in front of the altar that says, ‘Notre Dame’. The boys can pretend that they are saying mass.”

So they all went behind the altar and Mary took their picture. She could tell that the woman wondered who she was. The woman turned her head and looked at Mary. Mary gave her the camera and she thanked Mary.

The young mother hesitated and then she asked Mary very innocently, “Can we light a candle?” And Mary said, “Yes!”