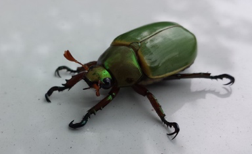 A Gofer in the Basement

Clearly the glory to which we are called is a strange kind of glory, rooted not in our goodness but in God’s faithfulness, and characterized not by success but by servanthood.

There was once a man named Horville Sash. Horville had a very humble job in the offices of the largest corporation of the world. He worked as the gofer in the lowest reaches of the building doing what he could to help other people do their jobs, but often he wondered and thought about the floor just above his.

One day Horville found a bug scurrying across the floor. As the mail room clerk, Horville had only bugs to command and to bully. He raised his foot to flatten the helpless bug. “Spare me.”The bug spoke. A speaking bug? Horville spared the bug. His reward: A wish. “I wish to be promoted to the second floor.”Granted. Horville’s boss told him that very day. Horville marched to the second floor like MacArthur and Patton rolled into one.

Wait. Horville heard footsteps on the ceiling of floor number two. There was a third floor. A higher level meant higher wages, more power. The next day, Horville rose to the third floor job of sales coordinator. But he wasn’t satisfied, he now knew there were other floors, many others and the promotions were like kerosene to a flame. He went to the 10th floor, then to the 20th, the 50th, the 70th. Horville sat by the indoor pool on floor 96.

The next day Horville discovered, and it was only by chance, a stairway leading up to another floor. He scrambled up the stairs. He was on the roof. He was now the highest, the most powerful. Content. Horville headed for the stairway.

Just as he turned to go back down to his office he saw a boy near the edge of the building with his eyes closed. “What are you doing?” “Praying.” “To whom?” The boy answered, pointing a finger skyward, “To God.”

Panic gripped Horville. Was there a floor above him? He couldn’t see it. Just clouds. He couldn’t hear the shuffling of feet. “Do you mean there’s an authority above me?” “Yes.”The bug was summoned, “Make me God. Make me the highest,” he said. “Put me in the type of position that only God would hold if he were on earth.”

The very next day, Horville began work as a gofer in the basement!

The glory of God is that he came to love us and serve us. He was born in a stable and placed in a manger. His work was as a gofer in the basement of this world, as it were. For God came to identify with the lonely, the outcasts, the poor and the powerless. And it is our glory to live like him.

What does the moral of this story mean to you? How are YOU like Jesus – A gofer in the basement of this world?