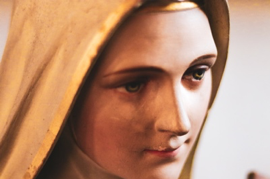 A “Hail Mary Pass” is a term we are hearing more and more of in football games. It is late in the 4th Quarter, a team is losing and they have a long way to go for a touchdown. So the quarterback in desperation unleashes a long pass into the end zone. The team and the fans are hoping for a catch and a touchdown. But there is only a sliver of a chance for victory.

The “Hail Mary Pass” goes back to the 1930’s when Notre Dame was in dire straits late in the game and unloaded a long pass. The term became widespread after a December 28, 1975 NFL playoff game between the Dallas Cowboys and the Minnesota Vikings. The Cowboys quarterback, Roger Staubach, a devoted Catholic, launched a game-winning pass to Drew Pearson. After the game Staubach remarked, “I closed my eyes and said a Hail Mary.”

For centuries Catholic Christians had their own version of the Hail Mary Pass. More than a few Catholics went about their sinful lives until the end was near. Then there was a frantic call for the priest to come to administer the Last Rites. The forgiveness and absolution of the sins of a lifetime and the anointing with oil was regarded as the entre into heaven.

Al Capone is often cited for going this route. I’m not really sure how God, just judge that God is, really feels about Hail Mary Passes or the Last Rites for hard-core sinners. We’ll all know the answer by the temperature we find ourselves in when we arrive in eternity.

Today’s Gospel (Luke 1:26-38) is such a stark contrast to Last Rites thinking and Hail Mary Passes, even though the desperation football pass bears Mary’s name. The angel Gabriel appears to a frightened sixteen-year old Mary and tells her to not be afraid. She has found favor with God. She will conceive and bear a Son named Jesus, the Son of the Most High God.

Understanding none of this, Mary says, “Behold, I am the handmaid of the Lord. Be it done to me according to your word.”

We see two totally different scenes – a mercurial quarterback adored by millions of fans, displaying his prowess for capturing victory from the jaws of defeat through a Hail Mary Pass.

A cock-sure Al Capone at the age of 48, is lying on his death-bed trying to punch his ticket to heaven through a last-second absolution and Last Rites.

Mary is anything but a Last Rites or Hail Mary Pass woman. By the age of sixteen she was ready to surrender her life to God and then watch God guide her through all the twists and turns of her life. Mary’s message to you and to me just five days to go before Christmas is –

Let God have you,
And let God love you.
And don’t be surprised
If your heart begins to hear
Music you’ve never heard
And your feet learn to dance
As never before.

ONCE YOU ARE WILLING TO LET GO OF YOURSELF, LIFE BECOMES YOUR FRIEND