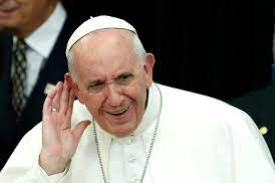 A Noun, Not An Adjective!

In 2019 eight minor British celebrities put on their rucksacks and walking boots and spent 15 days walking the ancient Via Francigena on a pilgrimage from the Swiss-Italian border to Rome.

Their journey took them across the Alps, but it ended with a private audience with Pope Francis. It appeared on television as, Pilgrimage: The Road to Rome.

Among the eight pilgrims – who included a Muslim, a non-practicing Jew, a practicing Catholic, a lapsed Jehovah’s Witness, and an atheist — was Stephen K. Amos, a gay comedian, who was angry at what he saw as religion’s rejection of him.

Arriving at the Eternal City, gawping at its treasures, the pilgrims learned that Pope Francis would receive them in a private audience that would be filmed. Amos insisted on being allowed to challenge the pope and the Church’s doctrines. The producers feared a diplomatic incident, but this was the era of Francis: the Vatican said fine, he could tell the pope whatever he wanted.

As the pilgrims one by one introduced themselves, Amos spoke to Pope Francis of his recent bereavements. “So me coming on this pilgrimage, being nonreligious, I was looking for answers and faith. But as a gay man, I don’t feel accepted.”

The pope looked at him lovingly, with a furrowed brow. “Giving more importance to the adjective rather than the noun – this is not good,” he told him. “We are all human beings and have dignity. It does not matter who you are, or how you live your life, or have this or that tendency – you do not lose your dignity. There are people that prefer to select or discard people because of an adjective; these people do not have a human heart.”

As Francis spoke, Amos was in tears – as was everyone else. Later the two men hugged, and Amos breathlessly thanked him. Interviewed afterward he said the pope’s answer had “blown his mind,” that this was “what  I’ve been searching after for a long time.”

In follow-up interviews, he said he had left Francis with joy in his heart, that his eyes had been opened to not judge religious people based on his religious experiences. He told how a door had opened, and the weight of his grief had lifted.

Hence – as Pope Francis said in his Chrism Mass 2018 homily – it was not just untruthful, but inhuman, to confuse the adjective with the noun. “There is a distasteful habit , is there not, of following a ‘culture of the adjective’: this is so, this is such and such, this is like….No! This is a child of God. Then comes the virtues or the defects, but first is the faithful truth of the person and not the adjective instead of the noun.”

“Seeing with the eyes of faith is a summons not to spend your life pinning labels, classifying those who are worthy of love and those who are not, but trying to create conditions in which every person can feel loved.”      Pope Francis

Lent is a great time for YOU and for ME to really concentrate on seeing each and every person as a NOUN and not as an ADJECTIVE……as a child of God.

This is from Wounded Shepherd, Pope Francis and His Struggle to Convert the Catholic Churchby Austen Ivereigh.