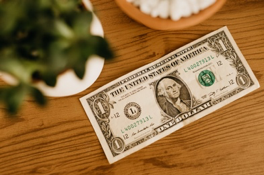 An Allegiance to God

The late Danny Thomas lost his life savings of $600.00 at a time when he was out of work. He and his wife, Rosie, had a baby on the way, and they needed money. Danny worked at part-time jobs so Rosie could buy groceries. He also borrowed money from friends.

It was a tough time in his life. A week before the baby was born, Danny had the grand total of $7.85 to his name. What would he do? “My despair led me to my first exposure to the powers of faith,” Danny would later recall.

On Sunday morning Danny went to church. When the offering basket was passed he put in his “usual one dollar.” But something unexpected happened that day. A special missions offering was taken. The priest explained where the mission offering would go, and Danny felt he had to give something. “I got carried away,” Danny said, “and ended up giving my seven dollars.” He had given away all his money that Sunday.

What in the world had he done? He walked up to the altar rail, got on his knees and prayed aloud. “Look, I’ve given my last seven bucks,” he prayed. “I need it back tenfold because I’ve got a kid on the way, and I have to pay the hospital bill.” He went home with a mere 85 cents in his pocket, all the money he had in the world.

“You won’t believe this,” Danny Thomas later wrote, “but the next morning the phone rang in the rooming house hall.” It was a job offer. He was offered a part in a commercial. The job wasn’t much but the pay was good, $75.00. “I literally dropped the telephone receiver.”

Danny wrote later, “First I whooped with joy; then an eerie feeling came over me.” He remembered what he had prayed at church the day before. “The $75.00 fee,” he said, “unheard of for me at that time, was almost exactly ten times the amount of money I had donated to the church.”

The important truth about this story is not that Danny Thomas received a tenfold return on his money. He might have done just as well at the racetrack. The important thing was Danny Thomas’ lifelong allegiance to God. Those of you who know his story know that St. Jude’s Hospital for Children in Memphis Tennessee stands today as silent testimony to that allegiance.

Often when God asks us, “What will you give?” we take the little bit that we can spare, the part we can easily give and offer it to God. The question is one of total allegiance. How committed are you to God?

THE CLOSER YOU LIVE TO GOD, THE SMALLER EVERYTHING ELSE BECOMES!