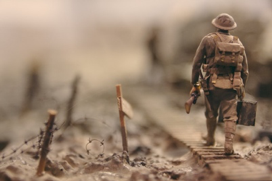 A mother was teaching her 3-year old daughter the Lord’s Prayer.

At bedtime, she repeated after her mother the lines from the prayer. Finally, the little girl decided to go solo. Mom listened with pride as she carefully enunciated each word, right up to the end of the prayer: “Lead us not into temptation, but deliver us from E-mail. Amen.”

The little girl was only 3-years old, but she had already figured out one of the biggest temptations in life – E-Mail!

In today’s Gospel (Luke 4:1-13), we see Jesus beginning his Public Life. He goes to pray in the desert. The devil comes and tempts Jesus 3 times. Are these temptations to do something bad or to do something good?

The devil says:  “If you are the Son of God, turn these stones into bread.” Is this a good thing or a bad thing? If Jesus turns the stones into bread, then those who are starving to death will have food to eat.  They say 21,000 children die every day due to a lack of food and nutrition.

In the second temptation, the devil says: “I’ll give you the power over all the kingdoms of the world if you bow down before me and worship me.”  Is this a good thing or a bad thing? The devil is saying to bow down before him and Jesus will have the power to get rid of all nuclear weapons and have power over Russia to put an end to the war in the Ukraine.  Jesus will be able to bring about peace throughout the world.

In the third temptation, the devil says, “Throw yourself off the top of the temple and if you are the Son of God, your angels will scoop you up and save you.” Most of us would say this is a good thing. Let’s see the proof that Jesus is really God and see what his angels can do.

So Jesus was not tempted by the devil to sin, but to live out his life in a different way. “Hey, Jesus, make it a whole lot easier on yourself and everybody else.” The devil was tempting Jesus to be the King of the World:

Sounds good to me! Sounds real good to me! So why didn’t Jesus do it? Feed the starving? End the wars and the nuclear threats? Prove, really prove he is the Son of God?

But when you really think about it….What you’ve done is create your own world. Not the world God created. You’ve created your own outcomes. Not God’s outcomes.

Isn’t that what the devil does? He leads us to create our own world and our own outcomes:  “I know what is best for the world!!” And when an Adolph Hitler or a Vladimir Putin gets enough power from the devil and from people who are their intelligent sheep, they try to create a world that enslaves people and kills millions of people.

I heard something interesting:  A commentator said that wherever Hitler is today (probably hell), he’s most likely still celebrating and saying, “There’s no doubt that I won World War II. I tortured and killed 6 million Jews, didn’t I? It was all worth it! That’s what I call Winning Big!”

The devil was trying to succeed with Jesus the way he eventually succeeded with Hitler – Sell him on a big easy win. Entice him to create an alternate world of reality and an alternative world of facts and truth.

The devil was saying that there was no need for a real, tangible Kingdom here on earth or in heaven. His alternative reality Kingdom of turning bread into stones, ending all bloodshed, and having angels scoop him up in midair was by far the better choice.

Jesus could not be fooled. He knew clearly why the Father had sent him – to teach us about a real, tangible Kingdom here on earth and a real Kingdom of Heaven.

ABOUT THE ONLY TIME LOSING IS MORE FUN THAN WINNING IS WHEN YOU’RE FIGHTING TEMPTATION.