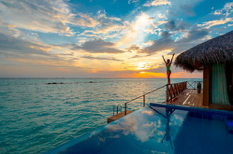 Are You a Realist?

There was a man who went sailing on a luxury liner who suddenly fell overboard. He could not swim and in desperation he began calling for help. Now it just so happened that there were several would be rescuers on deck who witnessed the incident.

The first man was a Moralist. When he saw the man fall overboard he immediately reached into his briefcase and pulled out a book on how to swim. He tossed it to him and he yelled: “Now brother, you read that and just follow the instructions and you will be alright.”

The man next to him happened to be an Idealist. When he saw the man fall overboard he immediately jumped into the water and began swimming all around the drowning man saying: “Now just watch me swim. Do as I do and you will be alright.”

The person next to him happened to be a member of the Institutional Church. He looked upon the drowning man’s plight with deep concern. He yelled out: “Now, just hold on friend. Help is on the way. We are going to establish a committee and dialogue about your problem. And then, if we can come up with the proper financing, we will resolve your dilemma.”

The next man on deck happened to be a representative of the school of Positive Thinking. He yelled out to the drowning man: “Friend, this situation is not nearly as bad as you think. Think dry land!”

The next man on board happened to be a Revivalist. By this time the drowning man was going down for the third time and desperately began waving his arm. Seeing that, the revivalist yelled out: “Yes brother, I see that hand, is there another? Is there another?”

And finally, the last man on deck, was a Realist. He immediately plunged into the water, at the risk of his own life, and pulled the victim to safety.

Jesus has told us: “The harvest is plentiful, but the workers are few.” We need realists in the church who are willing plunge into the water and go to work.

If we are going to be effective in reaching people for Christ we are going to have to start showing people that we really care about them. There is no record of Jesus walking up to someone out of the clear blue and saying: “I am the Messiah” and then beginning to show his care for them. No, Jesus showed his care for them first and then he revealed himself to them later.

Think of a time when YOU plunged into the water and went to work.

LIFE:  THE TIME GOD GIVES YOU TO DETERMINE HOW YOU WILL SPEND YOUR ETERNITY!