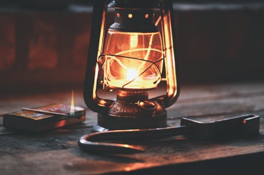 A young woman busied herself getting ready for a blind date. She was to have dinner at an exclusive restaurant with live music and dancing. She was excited. She went out to have her hair done, spent time getting her makeup just right, put on her best dress and was ready for her date’s arrival. However, his expected arrival time came and went.

After waiting an hour, she decided she had been stood up. Disheartened, she took off her dress, let down her hair, put on her pajamas, gathered a box of chocolates around her and sat down to watch TV. About an hour later the doorbell rang. It was her date. He looked at her with a surprised expression and said, “What? I gave you an extra two hours and you’re still not ready?” Would this be justifiable homicide?

Today Jesus tells a parable about ten young women who were invited to a wedding party (Matt 25: 1-13).  This was a very festive occasion and they were probably excited about being chosen to participate. They knew that one of their responsibilities was to greet the groom and light his path to the banquet hall with lamps held aloft. However, five of them were foolish and five were wise. The wise ones carried some extra oil in jars along with their lamps, the foolish ones did not.

The bridegroom was delayed and they all became drowsy and fell asleep. Suddenly, at midnight, the cry rang out: “Here’s the bridegroom! Come out to meet him!”

At that, all the young women woke up and trimmed their lamps. However, those who did not bring extra oil discovered that they didn’t have enough oil to exercise their duties. And so the foolish ones said to the wise ones, “Give us some of your oil; our lamps are going out.”

A little selfishly the wiser girls replied, “No, there may not be enough for both us and you. Instead, go to those who sell oil and buy some for yourselves.”

Well, what choice did they have? And so these neglectful young women headed out into the night to buy oil. But while they were on their way to buy the oil, the bridegroom arrived. The young women who were ready went in with him to the wedding banquet. Then Jesus uses these ominous words. “Then the door was locked”

Later the five foolish young women also came to the door. “Lord, Lord,” they said, “open the door for us!”

Jesus follows this parable with this admonition: “Therefore stay awake, for you know neither the day nor the hour.”

No wonder the scouts have the motto, “Be prepared.”  This is also what Jesus says to us as well.

What “spiritual oil” do you have in your lamp that is keeping you positive and going after such a tumultuous election week?

THOUGH MY WORLD IS SHAKY AND UNCERTAIN, I CAN REST IN THE ARMS OF A COMPLETELY UNSHAKABLE GOD.