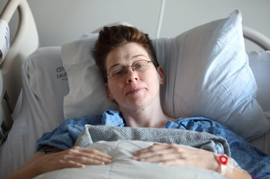 “Because I Need You!”

A man named John was strong and self-reliant and he rarely expressed his emotions outwardly.

One night he had to rush his wife to the hospital for emergency surgery. The operation was successful, but his wife’s condition worsened. Despite blood transfusions and intensive care, she continued to lose strength. The doctors were puzzled, because by all medical standards, she should have been recovering.

Finally, the doctor became convinced that she was deteriorating  because she was not trying to get well. He went to her bedside and said, “I think you would want to get well for John.”  She replied weakly, “John is so strong, he doesn’t need anybody.”

The doctor called John and told him what his wife had said. John immediately went to his wife’s room, took her hand and said to her, “You’ve got to get well.” Without opening her eyes, she said,“Why?” “Because I need you,” he blurted out.

At this point the nurse who was monitoring the blood transfusion said she noticed an immediate change in the pulse rate of John’s wife. The woman opened her eyes and said, “John, that’s the first time you ever said that to me.” Two weeks later she was home and recovering well.

John’s words were as effective in curing his wife as Jesus’ cure of the deaf man who could hardly talk in today’s Gospel. (Mark 7:31-37).

What words of affirmation can YOU utter to someone this week that will help cure their lack of self-worth or the difficulty they are going through?

GOD IS BIGGER THAN – YOUR PAST, YOUR PAIN, YOUR ANGER, YOUR FEARS AND YOUR SCARS!

Do you believe in Resurrection? I certainly do!! There has been so much death and destruction by nature in Haiti the past few weeks – a 7.2 earthquake, Hurricane Grace and many severe aftershocks. YOU can bring Hope, Help and Resurrection to a million suffering people in Haiti! Please RSVP and Register today for our Virtual Event on September 16th. at 7:00 PM CST.   www.foodforthepoor.org/buildingdreams.