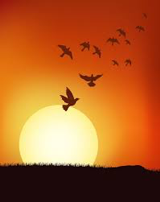 Birds Sing After a Storm

A young woman went off to college and left her plants and her goldfish in the care of her mother. Her Mom had the tendency to be forgetful and she also had “a brown thumb”.

So a month later her mother had to break the news to her that her plants had died. And a week after that she confessed to her daughter that her goldfish had died. There was a long pause, and in a fearful voice the young woman asked: “How’s Dad?” The young woman in college was afraid about her Dad after her plants and her goldfish under her mother’s care had died. We could say she had a “troubled heart”. Nothing like starting Mother’s Day with a little story like that!

Jesus starts off our Gospel today by saying, “Do not let your hearts be troubled” (John 14:1-12). If I asked you to describe a “troubled heart”, what words would you use? Fearful? Angry? Envious? Stressed Out? Bitter?

The reason that most hearts are troubled boils down to one word – FEAR!  Just about every report, consideration or thought connected with the coronavirus pandemic has an underlying FEAR embedded in it. But FEAR is embedded in most of the other aspects of a “troubled heart”.

What is Envy? The fear that we won’t measure up to what someone else possesses. What is Greed? The fear that what we have is not enough. Our basic problem is FEAR, long before COVID-19 came along.

Think of the many times Jesus says, “Do not be afraid!” That is what he is saying here: “Don’t’ let your hearts be troubled.”

Of course some of us have legitimate problems, including legitimate fears, about our health, our family, our future, and of course, the coronavirus. But many of us are troubled far beyond what we need to be.

We need to open ourselves to The Great Physician and ask God to change our attitude toward life. First of all, we can ask God for a new perspective so we can see our lives in a new and different way. On the Fourth Sunday of Lent, the Gospel was about the man born blind and how Jesus restored his sight.

You may recall that I told the story about the man who got on a train car with his 3 young children. Immediately his children started running, screaming and bumping into people on the train. People were noticeably upset. But the father just sat there and did nothing.

Finally the person sitting next to him said: “Sir, your children are being obnoxious and disturbing everyone. Won’t you do something?” The father came out of his daze and said, “Oh, yes, you’re right, I have to do something. Their mother died this morning and we’re coming home from the hospital. I don’t think they are handling it well. I’m not sure what I need to do next.”

Until the father shared that their mother had died that morning, everyone in the train car was seeing the 3 children with the 2 eyes in their head. Now they were able to see the children with the eyes of their heart. This is probably the best cure for a troubled and a fearful heart – to see things with our heart.

An elderly woman fell and broke her hip. She asked her doctor: “How long must I stay in bed?” “One day at a time,”he replied.

Most of all, we need to ask The Great Physician for more faith. Faith in God is the best remedy for a troubled heart. Jesus says, “Do not let your hearts be troubled. You have faith in God. Have faith also in me.”

When she was 93-years old, Rose Kennedy was interviewed by a reporter. By this time 4 of her 9 children had suffered violent deaths. Her daughter Rosemary had spent her whole life in an institution due to her mental problems. Rose Kennedy’s marriage to Joe Kennedy had not been a very happy one.

“Birds sing after a storm,” she said, “why shouldn’t we?”

How have YOU sung after the storms in YOUR life?

I wish all the Mothers, Grandmothers, Godmothers, and those very Special Women in our lives – A BLESSED MOTHER’S DAY!!!