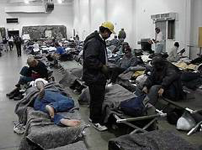 IN THE NEXT COUPLE OF DAYS, I WILL BE CHANGING THE LOOK OF MY DAILY TREATS AND WEEKEND MESSAGES. THE FIRST PARAGRAPH WILL APPEAR. THEN YOU  CLICK “READ MORE” AND YOU WILL IN A SPLIT SECOND MOVE TO THE TREATS FOR THE SOUL WEBSITE TO READ THE REST OF THE ARTICLE AND ENJOY OTHER FEATURES. AFTER ALMOST 2 YEARS, IT’S TIME FOR A NEW LOOK!

A few years ago a church located in a large city decided to turn its gymnasium into a night PADS shelter for homeless people.

Every winter there were reports that some of these people, condemned to sleep out in the open, had frozen to death, and so the church made the warmth and safety of its building available without charge. Each evening during the winter, volunteers from the church would spend the night in the shelter, providing food, clothing, and lodging for as many of the homeless as the building would hold.

Almost without exception, the volunteers reported that the experience of spending the night with these people from the streets had been far more than an act of dutiful charity. The volunteers had found their own faith strengthened, their own reliance upon the grace of Christ reinforced by the experience.

Several months after the shelter was opened, one of the pastors of the church was being interviewed on a radio talk program. The interviewer was an opinionated fundamentalist whose biases were quite strong. It became clear during the interview that he felt that the church ought to stick to the business of preaching the old-time gospel and stay away from meddlesome activities like shelters for homeless people.

“Now just tell me,” he jeered at one point, “where is Jesus in all this?” For a moment the pastor considered silently how to respond, then said calmly, “You just have to be there.”

“Come and see,” said Philip, the future Apostle,  to Nathaniel. Some people do not see because they will not come to those places where one can get an angle of vision, where one can see the grace of Christ at work in the world.

Thanks to Thomas Long for sharing this.

On every one of my trips to Haiti where we are dealing with the basics of life and human existence, it is so much easier for me to actually see the grace of Jesus at work without all the distractions.

Think of a time when you said to someone, “Come and see,” because you wanted them to see the grace of Jesus at work.