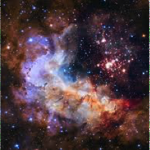 Contemplate for a Moment

We arrive in this universe through no choice of our own, at a time and a place not of our choosing.


For a few moments, like cosmic fireflies, we will travel with other humans, with our parents, with our sisters and brothers, with our children, with friends and enemies.

We will travel, too, with other life-forms, from bacteria to baboons, with rocks and oceans and auroras, with moons and meteors, planets and stars, with quarks and photons and supernovas and black holes, with slugs and cell phones, and lots and lots of empty space.

The cavalcade is rich, colorful, cacophonous, and mysterious, and though we humans will eventually leave it, the cavalcade will move on.

In the remote future, other travelers will join and leave the cavalcade. Eventually, though, the cavalcade will thin out.

Gazillions of years from today, it will fade away like a ghost at dawn, dissolving into the ocean of energy from which it first appeared.

What is this strange crowd we travel with? What is our place in the cavalcade? Where did it set out from, where is it heading, and how will it finally fade away?

The Introduction paragraph from Origin Story, a Big History of Everything by David Christian.