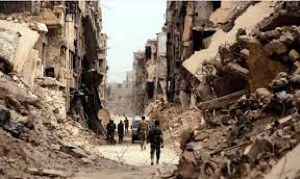 their hen met its end
and so did their goat and their dog
(their cat was out)
and people said, they died of old age

their cottage fell apart
their shed turned into ruins
and the cellar got covered with dirt
people said, everything collapsed from old age

their children came to bury the granddad and granny
Olha was pregnant
Serhiy was drunk
and Sonya was only three
they all perished, too
and people said, they died of old age

the cold wind plucked yellow leaves and buried beneath them
the granddad, the granny, Olha, Serhiy and Sonya
who all died of old age

Lyuba Yakimchuk was born in 1985. She is a Ukrainian poet, screenwriter, and journalist. She is the author of several full-length poetry collections. Lyuba has shared her poems along with musical accompaniment in concerts all over the world.

Lyuba was a scholar in the “Gaude Polonia” program of the Ministry of Culture and National Her­itage (Poland). In 2015, Kyiv’s New Time magazine listed Yakimchuk among the one hundred most influential cultural figures in Ukraine.

Christians are at war with other Christians and killing one another in Ukraine. What does this say about the foundations of our Christian faith and the message that it sends? Many people are NOT dying there of old age.

Alexei Navalny is a Russian opposition leader, lawyer and anti-corruption leader. He has run for political office in Russia against Vladimir Putin. In August of 2020 he almost died after Putin poisoned him with a nerve agent. Against many voices, he returned to Russia where he is currently in a Russian corrective labor colony and is tortured at times.

With the war raging on in Ukraine, last week Alexei Navalny sent a message from his cell to the rest of the world –

What can YOU and I do to FIGHT against war!!

ANYTHING WAR CAN DO, PEACE CAN DO BETTER!!