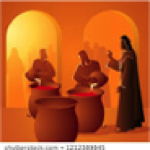 How Does Jesus Show He Is the Greatest?

Imagine that the Bible was lost and somebody today was given the task of recording, to the best of their ability, the deeds and the words of Jesus. They were to give an account of the good influence that Jesus had had in people’s lives. What do you think would have been recorded as the first instance through which Jesus showed his greatness?

Imagine that there would be a poll among the Christians of the 21st century where they were to answer the question: How does Jesus show you that he is the greatest?

One thing I don’t think would make it among the top ten: Jesus showing up at a small town wedding, making water into wine. But that’s what the apostle John reports as Jesus’ very first miracle, when he revealed his glory to the disciples, when he showed them his greatness.

Why did he choose a small town wedding where he had to provide some more wine? These people had been partying for days and they had probably had enough to drink already. Why does Jesus choose to provide wine at a rural wedding when he would reveal his glory?

This story tells me that Jesus’ concern is to help people and in this case, to save a young couple and their families from embarrassment. People show up for the wedding and there is no wine for them to drink. A God Provide

Some people seem to think that a good Christian must be very serious. How very different the real Jesus is. He comes to a wedding. And he decides to perform his very first miracle to help people enjoy themselves and to take away the red faces of the bride, groom and their families.

Trust in HIS timing

Rely on HIS promises

Wait for HIS answers

Believe in HIS miracles

Rejoice in HIS goodness

Relax in HIS presence

Never hold on to anyone or anything tighter than you’re holding on to Jesus.