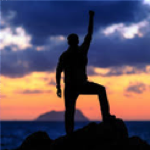 There is a true story about a husband and a wife who left a party one evening and got into their car to drive home. Once in the car the two of them got into a hum-dinger of a fight.

They were really going sat it in the car when they noticed that they were not driving through the best of neighborhoods. So they stopped long enough to lock their doors. Then they started arguing all over again.

The wife got so worked up after a few choice words from her husband that she shouted: “Stop the car right now. Let me out!” The husband pulled over. The wife unlocked her door and got out. Then she looked around and got back in the car again. Looking a bit sheepish, she said: “Take me to a better neighborhood!”

I wonder if those words weren’t on the Angel Gabriel’s mind when he landed in Mary and Joseph’s neighborhood 2,000 years ago (Matthew 1:18-24). Here was a really poor couple and the angel was probably wondering if some mistake had been made. Was this teenager Mary and this carpenter Joseph to be the mother and the foster father of God? Jesus – the Savior of the world!

What dispelled these thoughts in the angel’s mind? POWER! DIVINE POWER as opposed to HUMAN POWER!

We are so used to human power, we think it’s the only kind of power there is. Human power was what was going on in that car between the husband and the wife. “I’m right, you’re wrong!” “I can shout louder than you!” “I can use more profanity than you!” Human power!!

I checked back to the sermon I gave on the Fourth Sunday of Advent, right before Christmas, back in 1998 where I talked about human power vs. divine power. Congress had just impeached President Bill Clinton on December 19, 1998. Everyone in Washington was saying, “My way is the right way!” “You’re being partisan!”

Divine Power is so totally different! The angel soon found out he was in the right neighborhood. The Holy Spirit didn’t have to ZAP or overpower Mary. He didn’t have to hit her on the head. Mary was ready to say “YES” to God. Mary was glad to do God’s will in her life.

When we can say, “He spends himself, yet he never seems spent!” This person has Divine Power within, an Inner Strength. I find myself so lacking in Inner Strength when I think or I say, “I’m so busy, I don’t have time to go to the bathroom.” We say that Mary was “full of grace”. This means that she spent herself, but she was never spent. She had Inner Strength.

A good example of this is a young father who has pushing his son through a shopping mall trying to do some last-minute Christmas shopping. The child was screaming as they went along. The father kept murmuring, “Easy now, Eric. Just stay calm. It’s all right. Just relax Eric. Everything is going to be okay.”

A woman who was passing by was so impressed, she said: “You sure know how to talk to an upset child, quietly and softly.” The woman leaned over the stroller and cooed: “What seems to be the matter, Eric?”

Inner Strength. Divine Power. It’s what you need to be married to the same person for 50 years. There was a couple who were married for 50 years and their granddaughter decided to ask grandma what was her secret to a long, happy marriage?

“Well,” she said, “On my wedding day I decided to make a list of 10 of my husband’s faults, which for the sake of the marriage, I’d overlook.” The granddaughter of course asked her what some of his faults were that she chose to overlook.

She replied, “To tell you the truth, I never got around to making the list. But whenever he did something that made me hopping mad, I would say to myself, ‘Lucky for him that’s one of the 10’.” Inner Strength. Divine Power.

What Inner Strength and Divine Power do you find and use within you?