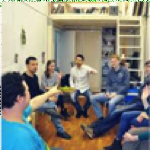 Laborers for the Harvest

A couple named Mary and Harold Brinig moved to Chicago many years ago. They had no friends in Chicago. Soon they were lonely. They were also irritable and unhappy with each other.

While seeking help from the Bible, they saw these words of Jesus: “You did not choose me, but I chose you and appointed you that you should go and bear fruit and that your fruit should last” (John 15:16) Somehow that passage became like light penetrating their darkness.They realized that much of their unhappiness was caused by self-centeredness. They wondered if Jesus was choosing them for some kind of unknown service. They also wondered what type of service they could possibly perform in such a big city as Chicago. A God AlertThe first person they encountered after this discovery was the waitress who served them in a nearby restaurant. She apologized for giving them such slow service and said she was new in the city and miserable. They invited her to visit them in their apartment after work.A neighbor who was a widower became the second person they befriended. Soon a dozen people were meeting once a week for conversation and prayer. Out of these meetings grew a project called “Adventures in Friendship.” Soon scores of people were involved in visiting the lonely and the shut-ins throughout the whole area. There was an interesting byproduct of this ministry. Mary and Harold became so absorbed in the needs of others that they soon forgot their own troubles. Their lives became immeasurably richer and fuller. A God Touch Probably Mary and Harold would never have thought of what they were doing as evangelism. They were simply showing compassion to people in need in Jesus’ name. That is what the church of Jesus Christ is all about.Jesus had compassion on the crowds. Harassed and helpless they were like sheep without a shepherd. And there were so many of them. Just like today. “The harvest is plentiful; but the laborers are few.” Where are the laborers? Where are those who care enough to become involved in the lives of others? Where are those willing to take their time to show love to young people and old folks, to the substance abuser and the victims of broken families, to the down and out as well as the up and in? Where are the laborers? Christ asks even today. Can he count on you?