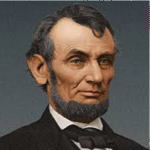 Today we celebrate Presidents’ Day. Of all our presidents, Abraham Lincoln has always fascinated me the most. I am not alone. There are currently more books in the English language about Lincoln than about anyone else except Jesus and Shakespeare.

Lincoln’s presidency was entirely consumed with war. On his first day in office he was greeted with a dispatch from Fort Sumter letting him know that the Union troops would have difficulty holding out for much longer unless they were resupplied. His last day in office came as a result of what might be called the “final shot” of the Civil War – the one fired by John Wilkes Booth.

Abraham Lincoln’s religious training began early. As a young lad he would go to church, hear a sermon, come home, take the younger children out, get on a stump or a log, and almost repeat the morning’s message word for word. His family said that, not only would he recall the sermon, but he would also mimic accurately the preacher’s eccentricities of style and voice.

Lincoln had his own ideas about what preaching ought to be. Later in life he reportedly said, “I do not like to hear cut and dried sermons. When I hear a man preach, I like to see him act as if he were fighting bees!” A God Poke

It is surprising to look back on Lincoln as a great wartime leader because story after story has come down to us concerning his compassionate nature – Lincoln pardons deserters, helps needy Southern families, and shows mercy for the Confederacy at Appomattox.

At the beginning of the war he was convinced that firmness should be tempered with restraint. Lincoln promised that while suppressing the rebels, Union troops would avoid “any devastation, any destruction of, or interference with, property, or any disturbance of peaceful citizens.”

Soon after settling in the White House, the Lincoln family rented a pew in Washington’s New York Avenue Presbyterian Church where Mrs. Lincoln became a member. The whole family regularly attended on Sunday mornings. The President also came to the mid-week prayer service.

But to avoid office-seekers and contractors who would pester him anytime he appeared in public, Lincoln did not sit with the congregation. He used a side entrance and sat in the minister’s darkened study with the door slightly ajar so he could hear what was going on. The President said that he always found that listening to people talking TO God was a greater source of strength than listening to people talking ABOUT God.

Concerning his own profession of faith Lincoln said, “I cannot without mental reservations assent to long and complicated creeds and catechisms. If a church would ask simply for assent to the Savior’s statement of the substance of the law: `Thou shalt love the Lord thy God with all thy heart and with all thy soul and with all thy mind and thy neighbor as thyself’ – that church would I gladly unite with.” Many people today would echo that sentiment. A God Touch

One of the best preachers of Lincoln’s day, Phillips Brooks, in a memorial sermon after Lincoln’s assassination said, “He fed us faithfully and truly. He fed us with counsel when we were in doubt, with inspiration when we sometimes faltered, with caution when we would be rash…

“He fed hungry souls all over the country with sympathy and consolation…He fed us with solemn, solid truths…Best of all, he fed us with a reverent and genuine religion. He spread before us the love and fear of God just in that shape in which we need them most, and out of his faithful service of a higher Master, who of us has not taken and eaten and grown strong?

“At the last, behold Lincoln standing with hand reached out to feed the South with mercy and the North with charity, and the whole land with peace, when the Lord who had sent him called him and his work was done!”

Abraham Lincoln saw a better day ahead for our country. Just one month before his death he challenged his America and our America today:

“With malice toward none, with charity for all, with firmness in the right as God gives us to see the right, let us finish the work we are in, to bind up the nation’s wounds, to care for him who shall have borne the battle, and for his widow and his orphans, to do all which may achieve and cherish a just and lasting peace among ourselves and all nations.”

Yes, Mr. Lincoln, Yes. Look upon our country today and help us to be all that you lived and died for.