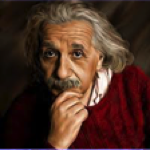 One Life Is NOT Enough!

When we began the new century of 2000, Time Magazine chose Albert Einstein as the Person of the 20th century out of 100 candidates. The editors of Time believed the 20th century “will be remembered foremost for its science and technology”, and Einstein “serves as a symbol of all the scientists.”

As the conductor moved down the aisle, he looked back and noticed Einstein on his hands and knees, searching under the seat for his ticket. The conductor returned to Einstein and said, “Dr. Einstein, Dr. Einstein, don’t worry. I know who you are. You don’t need a ticket, I’m sure you bought one.”

Einstein arose and said: “Young man, I too know who I am. What I don’t know is where I am going.”

In his writings Einstein stated he did not believe in life after death, adding “one life is enough for me.”

For those of us who believe and follow in the footsteps of Jesus, we do know where we are going. And we loudly shout out: “One life is NOT enough for me!”

That is the great news of Easter – that we know where we are going. We have been told by our Savior that his life and death has provided us with life eternal up ahead.

Divorce, bankruptcy, cancer, depression, felony, or failure does not change what Jesus has done for us at Easter.

Through elation and deflation and every emotion in between, this truth remains. We know whose we are and we know where we are going, because the Son of God has given us a promise.

God always keeps his promises! That is why our God is such an awesome God!