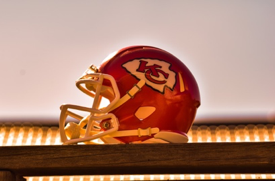 Some of you Old-Time football fans will remember Bo Schembechler, the legendary head coach of the Michigan Wolverines from 1969 to 1989. He passed away in 2006 at the age of 77 on the eve of the Michigan – Ohio State game, a No. 1 versus No. 2 showdown.

It is said that Schembechler used to work his players especially hard during spring practice to see what kind of young men he had, winners or quitters.  He made a sign with a slogan on it and hung it above the locker room door. The sign read: “Those Who Stay Will Be Champions.”

Of course, not everyone stayed. One morning Schembechler came to the office and looked at the sign. Underneath the words “Those Who Stay Will Be Champions” someone had written, “And those who quit will be Doctors, Lawyers, and Teachers.”

Laurent Duvernay-Tardif was the first medical doctor to play in the NFL. He has a medical degree but not a license to practice as yet. He played the biggest game of his life last year as right guard when the Kansas City Chiefs won the Super Bowl for the first time in 50 years. He hoisted the Lombardi Trophy in front of a worldwide audience.

Three months later Duvernay-Tardif took his seat in the chapel of a Quebec medical facility, dressed in scrubs and surrounded by nurses and orderlies, who were all nervous and exhausted. All had to work overtime. He saw his colleagues weeping, yet back they went to the bedside of their patients who were sick and dying of COVID-19, offering comfort as best they could.

This year Duvernay-Tardif, all 6-foot-5, 321 pounds, opted out of his season with the Kansas City Chiefs so he could work at the Covid-19 long-term care facility near his native Montreal. He traded his helmet for a mask and a face shield. He said plainly: “If I am to take a risk, I will do it caring for patients.”

Duvernay-Tardif still identifies himself as a Kansas City Chief. He finds there is as much team work in the hospital as there is on the playing field. But he also notes: “The definition of what it means to be a hero has changed because of these people.”

As you watch the Super Bowl tomorrow, spend some time putting yourself in the head and in the heart of Laurent Duvernay-Tardif for a few moments as he watches the game. It might be more enriching for you than the game or the commercials.

WHEN LIFE KNOCKS YOU DOWN, STAND UP AND SAY, “BRING IT ON! I HAVE JESUS ON MY TEAM!”