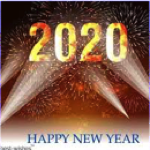 Such Wonderful Things in 2020!

At the beginning of a New Year, a high school principal decided to post his teachers’ New Year’s resolutions on the bulletin board.

As the teachers gathered around the bulletin board, a great commotion started. One of the teachers was complaining. “Why weren’t my resolutions posted?” She was throwing such a temper tantrum that the principal hurried to his office to see if he had overlooked her resolutions.

Sure enough, he had mislaid them on his desk. As he read her resolutions he was astounded. This teacher’s first resolution was not to let little things upset her in the New Year.

I don’t know how you are doing on your New Year’s resolutions. I do know something that is more important than resolutions, though. How do you see this New Year? Is it one that you approach with anxiety or anticipation?

Michael Bausch tells a great story about archaeologist Howard Carter. In 1922 Carter was completing nearly fifteen years of digging in the famous Valley of the Kings in Egypt.

He was hoping to find the royal tomb of Pharaoh Tutankhamen. Having found nothing, his days of digging were coming to an end. Money was running out. Then workers discovered sixteen stairs leading into the earth. Thousands of baskets filled with rocks and sand had to be carried away, but eventually a door was found at the end of a long passageway.

Carter drilled a small hole in the door and stuck an iron-testing rod into a dark, blank space. He then inserted a candle into the hole and peered in. As his eyes grew accustomed to the light, details emerged into his view, and he saw strange animals, statues, and everywhere the glint of gold.

He wrote of that moment, “For the moment, I was struck dumb with amazement.” A partner asked, “Can you see anything?” And Carter’s reply was, “Yes, wonderful things.”

You and I through Lectio Divina, meditation and contemplation need to look into this New Year of 2020 and see the wonderful things that await us. We need to do the hard work that Howard Carter did to discover the Pharaoh’s tomb. The New-Born Jesus in our hearts gives us the reasons why we can look forward with anticipation instead of anxiety to the New Year. A God Alert

Thanks to King Duncan

Are you more like the high school teacher or Howard Carter as 2020 begins? Anxious or hopeful?

God’s Face Is Towards Me!

Do you feel insecure as we go through this Advent season? You do if your marriage

Pick Up the Baby!

You may remember the humorist Sam Levinson. Sam tells the story of the birth of his