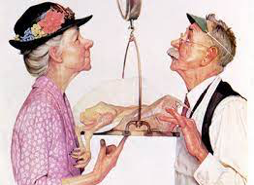 The Finger & The Thumb!

One of the famous Saturday Evening Post covers showed a woman buying a Thanksgiving turkey.

It appeared on October 3, 1936. Even though it greatly resembles a Norman Rockwell painting, it was done by Leslie Thrasher.

The turkey was on the scale and the butcher was standing behind the counter. The customer, a lady of about seventy, stood watching the weigh-in. Each had a pleased look, and a quick glance at the painting shows nothing unusual going on.

But then we look more closely. The butcher is pressing down on the scale with his thumb while the woman is pushing up with her finger.

Both people would resent being called thieves, since neither one saw anything wrong with their own deception. Both of them thought they were good, honest people.

If this painting appeared on the front cover of a magazine today, 85 years later, I hope there would be an article inside entitled WHATABOUTISM. I believe that “whataboutism” is one of the major problems our country is facing today.

The Oxford Dictionary defines “whataboutism” as the technique or practice of responding to an accusation by making a counteraccusation or raising a different issue.

One person will look at this picture and say, “Look at what this butcher is doing! He has his thumb on the scale. How dishonest! He’s cheating this old lady out of her hard-earned money!”

Another person will look at this picture and say, “But look at what this woman is doing! Her finger is pushing up on the scale so the turkey will weigh less. How dishonest! She is as bad, if not worse, than the butcher!”  This is a perfect example of “whataboutism”.

What both of them are doing is wrong and dishonest. But the one wrong does NOT make the other wrong seem to be not as bad or an okay thing to do. The two wrongs are unrelated. But the world we live in today unites the two wrongs – “whataboutism”.

I go back to the example of George Forman trying to get a license to fight in Las Vegas. He told the commission: “I’m no Mother Teresa, but I’m not Charles Manson either.” Another example of “whataboutism”. Whatabout Charles Manson?

On the Final Judgement Day, when George Forman is standing before the Lord for a heaven or hell judgement, do you think he will be able to summon Charles Manson and say, “Well I’m certainly better than this guy. Let me through the pearly gates.” The only person who will be standing next to George Forman or you and me on Judgement Day is Jesus Christ. God the Father will say, “Whatabout Jesus Christ? How does your life compare with the life of Jesus, not Charles Manson?”

When you turn on cable TV shows or talk radio, you hear so much of  “whataboutism”. People are arguing that an opponent is guilty of an offense just as egregious or worse than what the original party was accused of doing. So often the offences are unconnected.

Think of some times when you have said, “Whatabout……?”

Are YOU part of the INN CROWD or are YOU one of the STABLE FEW?

YOU can help someone to grow spiritually. Invite them to subscribe to: TreatsfortheSoul.org. It’s FREE! And please listen to my PODCAST today.