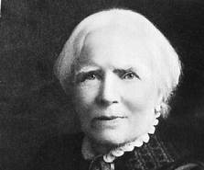 Elizabeth Blackwell was the first woman doctor in America. She started her practice in New York in 1851. Not only was she unable to find patients, no one would even rent her a room once she mentioned that she was a doctor.

After weeks of trudging the streets, she finally rented rooms from a landlady who asked no questions about what Elizabeth planned to do with them.

Quaker women, who had always been receptive to the goal of equal rights, became Elizabeth’s first patients. But no hospital would allow her on its staff.

Finally, with financial help from her Quaker friends, Elizabeth opened her own clinic in one of New York’s worst slums. The clinic opened in March, 1853. Elizabeth hung a sign out announcing that all patients would be treated FREE.

Yet, for the first few weeks, no one showed up. Then one day a woman in such agony that she didn’t care who treated her, staggered up the steps and collapsed in Elizabeth’s arms.

When the woman was treated and recovered, she told all her friends about the wonderful woman doctor in downtown New York. The dispensary was soon doing well. It eventually expanded, moved, and is now a branch of the New York Infirmary on East Fifteenth Street.

Why is it that it has to be an emergency situation or that we are at death’s door before we will seek help from a woman, such as Elizabeth Blackwell, from a person of color or from a person who looks or dresses different than ourselves?

Prejudice has many shapes and forms…..One day I was talking to a relative of mine. I asked him how he felt about women being doctors. He said that women had no business being doctors or dentists. They should be at home raising their children. Their home is where they belong.

I then asked this relative of mine what if he was very sick and loaded with cancer and the best doctor that other male doctors recommended him to see was a female doctor – Would he go and see her? His response – SILENCE. On this subject, I’ve never heard more than SILENCE from him.

Consider a time when YOUR walls of prejudice were up or were taken down by a given situation.  What lasting effect did this have on you?