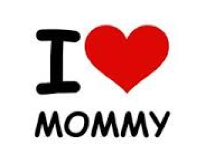 The Handwriting on the Wall!

Here is a simple poem to reflect upon with Mother’s Day coming on Sunday:

A weary mother returned from the store,

Lugging groceries through the kitchen door.

Awaiting her arrival was her eight-year-old son,

Eager to relate what his younger brother had done.

“While I was out playing and Dad was on a call,

T.J. took his crayons and wrote on the wall!

It’s on the new paper you just hung in the den.

I told him you’d be mad at having to do it again.”

She let out a moan and furrowed her brow.

“Where is your little brother right now?”

She emptied her arms and with a purposeful stride,

She marched to his closet where he had gone to hide.

She called his full name as she entered his room.

He trembled with fear–he knew that meant doom!

For the next ten minutes, she ranted and raved

About the expensive wallpaper and how she had saved.

Lamenting all the work it would take to repair,

She condemned his actions and total lack of care.

The more she scolded, the madder she got,

Then stomped from his room, totally distraught!

She headed for the den to confirm her fears.

When she saw the wall, her eyes flooded with tears.

The message she read pierced her soul with a dart.

It said, “I love Mommy,” surrounded by a heart.

Well, the wallpaper remained, just as she found it,

With an empty picture frame hung to surround it.

A reminder to her, and indeed to all,

Take time to read the handwriting on the wall.

MY GREATEST BLESSINGS CALL ME MOM!!

What “Handwriting on the Wall” have YOU read that speaks to YOU of another person’s love?

MOTHER IS THE NAME FOR GOD ON THE LIPS AND IN HEARTS OF LITTLE CHILDREN!