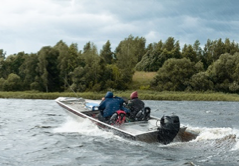 How many of us recognize ourselves in the Gospel that was proclaimed at church today?  (Luke 5:1-11).

Jesus gets into Simon Peter’s boat and teaches the crowds from the boat. He then tells Simon to “Put out into the deep water and lower your nets for a catch.”

Simon tells Jesus they have worked all night but have caught nothing. But he would do what Jesus commands. The Gospel says, “When they had done this, they caught a great number of fish and their nets were tearing.”

Psychologist Robert Johnson says, “Each person has an inborn urge to grow, to bring together all our missing parts into a complete and total self.”

Someone else has said, “By midlife, most of us have become accomplished fugitives from ourselves!”  This means that many of us are trying to become somebody else. Maybe it’s what our parents, a coach or a spouse wanted us to be. Or maybe we are becoming clones of what the advertisers are spending millions of dollars for 30 seconds of commercials on the Super Bowl next week. They will tell us what we should drink, munch on, drive and wear. They will get our attention and model for us how we should look, act and even think.

In subtle or not so subtle ways, we will be told that anyone who doesn’t wear Nike’s, who drives a second-class or old car, and who hasn’t said Good-Bye to their virginity by 16 – IS A LOSER! Notice how often you have heard this the last few years: YOU’RE A LOSER!! And it has not been subtle!

As a result, words like SACRIFICE, SERVICE and COURAGE have no place in our lives. We are told that only suckers act purely from moral conviction. Only suckers stick their necks out for what they believe in and for what is the truth.

Since I live now in Fort Lauderdale, Florida, I visit St. Thomas Aquinas High School on occasion. This is where Brian Piccolo went to school and played football (1958-1961). Despite leading the nation in rushing yards at Wake Forest University, he was considered too small and too slow for the pros. But Brian Piccolo had courage, lots of courage.

The Chicago Bears signed Piccolo as a free agent in 1965 and when Gayle Sayers got hurt, Piccolo took over his position on the field. In 1967 the Bears’ President asked Brian Piccolo and Gayle Sayers to become the first interracial roommates in the NFL. Brian Piccolo said YES, as long as Gayle Sayers didn’t use the bathroom!

Two years later, cancer the size of a grapefruit, was found in Brian’s chest. The next year was a living hell of suffering for Brian Piccolo, but all his teammates ever saw was his strength, his courage, his sacrifice and his great faith.

Every day, Brian Piccolo cast his net on the other side of the boat. When Gayle Sayers received the prestigious George S. Halas award for courage, he taped Brian Piccolo’s name on it. The trophy was buried with Brian Piccolo when he died on June 16, 1970 at the age of 26.

Fifty-two years later, St. Thomas Aquinas High School still plays the theme song, “The Hands of Time” from the TV  movie, Brian’s Song, at the end of every football game. They play this song for Brian Piccolo, not because he was such a great football player like a Tom Brady. They play this song because Brian Piccolo was such a great human being. His strength. His courage. His faith. His sacrifice. He cast his net on the other side of the boat.

Jesus tells you and me in the boat we are in to cast our nets onto the other side – into the waters of prayer, into the world of TODAY, that has been touched by God.

Today, in the boat with Jesus, he is speaking to those of us who are stuck in a rut, even when the rut is exciting, challenging and fast-paced. Jesus is pointing to the other side of life, a deeper side, a more fulfilling side.

And what will you and I find when we cast our nets on the other side? Exactly what the disciples found —  A FULL NET!!

What do YOU find when you cast YOUR net on the other side of YOUR boat?

SOMETIMES YOUR PLANS DON’T WORK OUT BECAUSE JESUS HAS BETTER ONES! 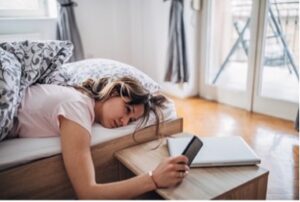 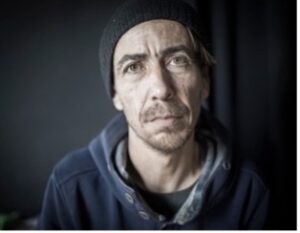