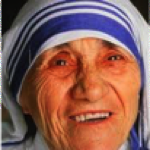 Michael Wayne Hunter was put on death row in California in 1983, in San Quentin Prison. After his third year on death row something happened.

One day he was getting ready to spend time exercising when the guard said, “You’re going to miss Mother Teresa. She’s coming today to see you guys.”

“Yea, sure,” he said, “one more of those designs they have on us.” A little later he heard more commotion about it and thought it might be true.

Another guard said, “Don’t go into your cells and lock up. Mother Teresa stayed to see you guys.” So Michael jogged up to the front in gym shorts and a tattered basketball shirt with the arms ripped out, and on the other side of the security screen was this tiny woman who looked 100 years old.

Yes, it was Mother Teresa.

This hardened prisoner wrote about his experience, he said, “You have to understand that, basically, I’m a dead man. I don’t have to observe any sort of social convention. And as a result, I can break all the rules, say what I want. But one look at this Nobel Prize winner, this woman so many people view as a living saint, and I was speechless.” A God Alert

Incredible vitality and warmth came from her wizened, piercing eyes. She smiled at him, blessed a religious medal, and put it in his hands. This murderer who wouldn’t have walked voluntarily down the hall to see the Warden, the Governor, the President, or the Pope, stood before this woman, and all he could say was, “Thank you, Mother Teresa.”

At one point Mother Teresa turned and pointed her hand at the sergeant, “What you do to these men,” she told him, “you do to God.” The sergeant almost faded away in surprise and wonder.

That day was a turning point in the life of Michael Wayne Hunter. This San Quentin Death Row prisoner was cleansed by that experience. Life changed. Suddenly there was meaning to it.

So drastic was the change a new trial was set and the death penalty was not sought. The verdict was guilty on both counts of first degree murder but a new sentence was given: Life without the possibility of parole.

The prosecution did not seek the death penalty because Mr. Hunter was now a model prisoner and an award-winning writer. He is one other thing: A testimony that Christ still is willing to heal, still willing to touch the untouchable, and to make us whole. Amen.