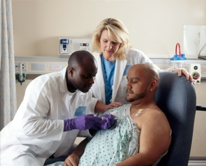 When Oliver Cromwell in 1764 was about to have his portrait painted, he coined the famous expression: “Paint me, warts and all!”

The proof that Jesus is the real deal is found in today’s Gospel (Matt 15:21-28). Jesus is on the run from the scribes and the Pharisees who want to kill him. He flees Palestine and goes North to what is Lebanon today, the site of the recent horrific explosion. Why is Jesus on the run? Because he’s scared. Scared of being caught and killed – warts and all.

Jesus planned to hide out as an illegal alien  and eventually sneak back into Palestine when he could. But his fame as a miracle-worker was too great for this to happen. A Canaanite woman with a sick child finds him. Hysterically she begs him to cure her daughter. His identity has been revealed.

The Apostles beg Jesus to get rid of her. Why? Because she is nothing but bad news. The woman was a Canaanite – the arch enemy of the Jews for centuries. This Canaanite woman goes into the public square which is reserved for men only. She shouts out to a man, not any man, but Jesus. She calls him the Son of David.

No woman in her right mind would ever think of doing this. Her loud cries would certainly attract the authorities and they would all get tossed into jail.

With the toughest language Jesus ever used, he tells her his mission is to the Jews. It cannot be shared with dogs – which is how the Jews regarded the Canaanites. Matthew is not writing a pretty Hallmark card of Jesus for his readers. Mark in his 7 th Chapter tells the same story. We’re hearing about Jesus, warts and all.

This woman proves to be one of the most remarkable people in all of the Gospels. She digs in. She does battle with Jesus and she wins. She proves to be the wordsmith Jesus is and even better! She hits him right between the eyes with her famous reply: “Lord, even the dogs get the crumbs from the owner’s table.” She wants the whole loaf – the cure of her child.

Jesus’ irritability and even his manners tell us that he was strung out. His nerves must have been shot. The heat in the square was over 100 degrees. So when he is confronted by this courageous woman, unlike most of us, he does not hold on to his anger. Jesus admits to his bad manners. He honors the woman by learning from her. Yes, Jesus too, at age 33, has things to learn. She has beaten him at the word game of which he was the master. Jesus probably even laughed at himself.

Jesus also salutes her faith. In Matthew’s Gospel, she is the only person whose faith he calls great. She is also great because she is the only person in any of the Gospels who beats Jesus in a public debate – a Canaanite woman, no less, in a very macho society. Is this not a real picture of Jesus – warts and all?

What originally is at work in today’s Gospel is prejudice. The Jews felt that they, by being Jews, were God’s chosen people. Everyone else was like the Canaanite woman – they were nothing but dogs, yapping in the street like the crazy Canaanite woman.

Recently I received an email that was widely circulated on the internet. The goal of this email was to reach 200 million people via the web. It was forwarded to me by a weekly church-attending couple that I have known for over 50 years. To me this email displays the worst form of prejudice that there is – Prejudice that is strictly and totally based on the color of a person’s skin.

The email’s message was that I should not vote for a particular candidate one reason only – the color of his skin. This sets off an anger in me that is second to none. To not vote for a candidate because he or she is not smart enough, is not experienced, doesn’t have the right morals, doesn’t have the right policies, or belongs to the wrong political party – I can accept.

But to tell me and 200 million other Americans to not vote for someone because of the color of his or her skin is wrong, very morally wrong. It is a sin.

I grew up in a lily-white, blue-collar suburb of Chicago. In 1958 a young well-educated black couple tried to move into the community. They were both accountants. The vast majority of the residents were blue-collar workers. Rocks and a bomb were thrown through their windows. Our Pastor and the other pastors preached against what was happening, but to no avail. For the safety of their little children, the couple moved out after two weeks.

Is this the world that you and I want your children and grandchildren to grow up in? If it is, then why don’t you turn off your TV every time a person of color comes on the screen? Don’t root for any baseball, football or basketball team that has people of color playing for them.

Until I was a teenager, every time I went to Wrigley Field, all around me I heard the ugliest of words shouted out at Jackie Robinson, Don Newcomb, and Willie Mays every time they came up to bat. It was not because they were playing the Cubs. It was because they were black. Today when I listen to what many of the people I know are saying about blacks they see on TV – I really think I am again living back in my childhood. It sounds much the same as it did then.

Every time I went to visit him at the hospital or the rehab center, he couldn’t wait to introduce me to his friends who gave him Tender Loving Care and wiped his backside. The color of their skin was always black. Lying horizontally all day, he became color-blind, especially to the color black.

The next time you meet me, maybe you would like to see my warts. I’ll be happy to show them to you. Their color is black….

What color are your warts? When you see a person of color on TV or in person, are you standing vertically or lying horizontally like my father did for 15 months? The perspective is quite different when you are lying horizontally for 24 hours a day!!!

Please check out how I see Jesus in our world today, warts and all, in my new book: THE GATHERING.