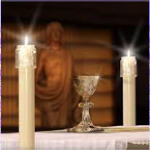 A newly ordained priest was assigned to a small parish in the hills of Kentucky. In his first sermon, he condemned gambling, especially betting on horses. The sermon was not well received by the people in the pews.

“You see, Father,” one of the parishioners explained, “this whole area is known for the fine thoroughbred horses we raise and sell.”

The next Sunday, the young priest talked about the evils of smoking and all the illnesses smoking causes. Again his sermon was not well received. “Some of our best parishioners grow and sell tobacco,” he was told after mass.

The next Sunday the newly ordained priest preached on the evils of drinking and how alcohol can destroy lives. Once again the parishioners did not like what they were hearing from the pulpit. The distillery was located near the town and many parishioners worked there.

The young, newly ordained priest was so frustrated by the parishioners’ reaction to his choice of sermon topics that he asked a kindly, older woman about what he should talk about the following Sunday.

“Oh Father,” she said, “preach against those godless, Chinese Communists. There isn’t a Chinese person within 7,000 miles of here!”

Jesus’ teachings were always challenging and demanding, radical and divisive. That’s why they crucified him. Jesus’ message was so radical that it divides families. His message was about the Good Samaritan, about turning the other cheek, about giving our garment to the poor, about forgiving seven times seventy, about walking the extra mile, and about actually seeing Jesus in the poor, the thirsty, the hungry, the naked and the prisoner.

But every once in a while someone catches fire from God. This person sees that there is more to the good life than acquiring more possessions. They actually listen to what Jesus is saying and hear the call to do something for others and not just listen to Jesus to feel good about themselves. You can name most of them as well as I can. They stand out. A God Provide

I don’t have any children, grandchildren, nephews or nieces. If I did and one of them came up to me and said, “Rather than go into business or become a doctor or a lawyer, I’d like to become a social worker after college.” What would I say to them? This is where the words of Jesus really hit home.

At some point I might well say, “Are you planning on getting married someday? The government just said it costs $261,000.00 to raise a child and that’s without a penny for college tuition. How much do you plan on making a year as a social worker? Where is the money going to come from?” At some point that is probably what I would say in our discussion. What would you say if you were approached by a young person with their wanting to be a social worker?

No wonder Jesus winds up talking about division in a family over matters like this. Is it any wonder that the fire Jesus said he’d rain down from heaven we’ve reduced to the 2 candles burning on the altar?