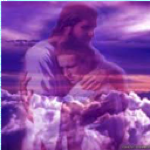 YOU Are the One Who Works With God

A mother came home one afternoon to discover that her kitchen was a disaster area. Her young daughter had obviously been busy “cooking” and the ingredients were scattered across the counters and floor, along with dirty bowls and utensils.

She was not happy with the situation. She had spent hours that morning in cleaning the kitchen. Then, as the mother looked a little more closely at the mess, she spied a tiny note on the table, clumsily written and smeared with chocolaty fingerprints. The message was short: “I’m makin’ somethin’ special for you, Mom” and it was signed: “YOUR ANGEL!”

In the midst of all the disarray and in spite of her irritation, a pure and simple JOY sprang up in that mother’s heart. Why? Her attention had been re-directed from the problem to the little girl she deeply loved. Call it A CHANGE OF FOCUS. God Tap

I think this is what Jesus is doing and saying in today’s Gospel reading (Luke 5:1-11). He is re-directing Simon Peter’s attention from the problem of not catching any fish all night to the Great Catch – all the men, women and children who need to know about God’s great love for them.

Jesus says to Simon Peter: “Put out into the deep water and lower your nets for a catch….You’re not going to catch anything here, Simon, go over there….Change your focus from the shallow water to the deeper water.”

That’s where the Lord wants Simon to be – in deeper water. Often enough that is where Jesus wants you and me to be – in deeper water. And like a lot of us – Simon argues with the Lord: “But, Master, we have worked hard all night, and have caught nothing, but at your command, I will lower the nets.” Simon then lowers the nets and a huge number of fish are caught.

There was as surgeon in a large hospital who had a habit of insisting that he be alone for a few minutes before every operation. He had a great reputation.

A young doctor who worked with him wondered if there was a connection between his unusual habit of time alone and his great success. When he asked the surgeon, he replied, “Yes, of course. Before each operation I ask the Great Physician to be with me, to guide my hands in their work.

There were times I didn’t know what to do next in an operation. Then a Power came over me, a Power I knew came from God. I would not think of performing an operation without first asking God’s help.” God Whisper

The doctor’s reputation spread. One day a father brought his very sick daughter to the emergency room of the hospital. He insisted that the only doctor he would allow to touch his daughter was THE ONE WHO WORKED WITH GOD!

It would be the greatest tribute of our life, that whoever preached at your funeral or mine, would say that __________ was THE ONE WHO WORKED WITH GOD!

My Last Day on Earth!

There was a man who claimed to be the most accurate fortuneteller in the world. A man

Just a Cup of Cold Water!

Today, the First Sunday of Advent, is the only Sunday in Advent when we will hear