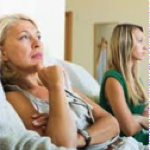 There is a scene in the movie Used People in which a mother/daughter confrontation occurs. In the movie, the daughter, who is rapidly approaching middle age, is a divorced, mother of two children, who is leaving home and heading for California to make a new life for herself and her children.

Naturally, her mother objects. And as mothers sometimes do, she tries to lay a load of guilt on her daughter in order to force her to reconsider this foolish idea.

The daughter, however, has learned a few tricks from her mother over the years. She tries to turn the tables and put mom on a guilt trip for a change. She accuses her mother of never being interested in what was going on in the daughter’s life unless it was something that posed a threat to her mother’s need for control.

At this point, the mother, played by Shirley McClain, makes an interesting comment, expressing an attitude that is fairly common today. She says, “I knew everything about you that I wanted to know.”

In other words, there were enough things over which I had no control that hurt me as it was. So why should I open myself up to more hurt by finding out about MORE things over which I have no control? The mother obviously believed in the theory that says if ignorance is not bliss, it is at least less painful than full knowledge of what the situation would be.

I have found it to be just the opposite. Ignorance rarely produces anything vaguely resembling happiness. To the contrary, ignorance is constantly frustrating, often embarrassing, sometimes costly, and always regrettable.

So it surprises me to see how often we, like the mother in the movie, choose ignorance in order to avoid guilt or responsibility for our failures. When we choose to be ignorant, for example, about the possible consequences of making a mad dash across a busy city street in rush hour traffic, sometimes we pay a price for our ignorance.

A group of Pharisees, showed their ignorance by assuming that Jesus had some sort of political agenda (Why else would he be touring the countryside, making speeches, and hugging all those children?). They came to Jesus one day with a tricky question:

“Teacher, we know that you are true and teach the way of God truthfully, and you do not care about anyone’s opinion, for you are not swayed by appearances. Tell us, then, what you think. Is it lawful to pay taxes to Caesar, or not?”

But Jesus, aware of their malice, said, “Why put me to the test, you hypocrites? Show me the coin for the tax.” And they brought him a denarius.

And Jesus said to them, “Whose likeness and inscription is this?” They said, “Caesar’s.”

With the help of Johnny Dean