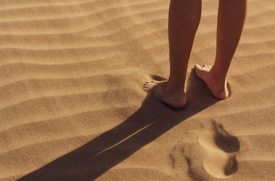 More Footprints in the Sand!

This Holy Week I found “A Variation on Footprints” to be most helpful in my own journey to Easter:

But gradually, your footprints come more in line with the Lord’s, soon paralleling his consistently. You and Jesus are walking as true friends. This seems perfect, but then an interesting thing happens. Your footprints that were etched in the sand next to his are now walking precisely IN his steps. Inside his larger footprints is the small “sand-print,” safely enclosed. You and Jesus are becoming one. This goes on for many miles.

But you notice another change. The footprint inside the larger footprint seems to grow larger. Eventually, it disappears altogether. There is only one set of footprints. They have become one. Again, this goes on for a long time.

But then something awful happens. The second set of footprints is back. And this time, it seems even worse. They zigzag all over the place. They stop. They start. Deep gashes in the sand. A veritable mess of prints. You’re amazed and shocked. But this is the end of your dream.

Now you speak: “Lord, I understand the first scene with the zigzags and fits and starts and so on. I was just learning to be a Christian. But you walked on through the storm and helped me learn to walk with you.”

“Yes, and when the smaller footprints were inside of yours, I was actually learning to walk in your steps. I followed you very closely.”

“Very good. You understand everything so far.” “Then the smaller footprints grew and eventually filled in with yours. I suppose that I was actually growing so much that I was becoming like you in every way.”

“But this is my question, Lord. Was there a regression or something? The footprints went back to two, and this time it was worse than the first.”

The Lord smiles, then laughs. Jesus says, “Didn’t you know? That was when we were dancing together!!”

Will YOU be walking along with and inside Jesus’ footsteps this Holy Week so that on Easter Sunday, YOU will be DANCING WITH THE RISEN LORD?

YOU NEED NOT BE AFRAID OF WHERE YOU ARE GOING WHEN YOU KNOW JESUS IS GOING WITH YOU! 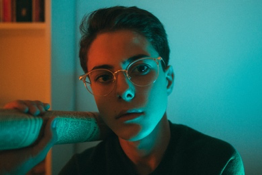 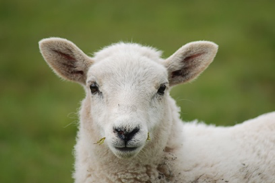